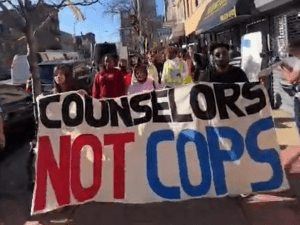 NEW JERSEY — It’s a simple formula, they say: “Fund education, not incarceration.” This was the rallying cry from nearly 300 students who led a march in North Jersey on Thursday to call for more resources in schools and an end to “overpolicing.”

The student organizers – youth leaders with advocacy group Make the Road New Jersey – included residents of Elizabeth and Newark. Together, they marched across Elizabeth Avenue, making stops at high schools, city hall and police stations along the way (watch the video below or see it online here).

Here’s why they hit the streets of Elizabeth, according to Make the Road New Jersey:

“After a challenging two years of loss and trauma during the pandemic, New Jersey students are facing a mounting mental health crisis exacerbated by the lack of mental health resources in schools. There is an increase in need for these services given the trauma from the pandemic and readjusting lives back in schools. Students are demanding New Jersey schools to be more safe, healthy and equitable, which means no more over policing, no more underfunding staff and the creation of programming in school districts where the majority of students are Black and Brown. After the tragic Uvalde shootings – when police did more harm than good in the schools – many school districts across New Jersey put armed guards in schools in a reactionary move that students argue will make students of color less safe.”

Students and youth leaders shared firsthand accounts of the negative effects of overpolicing at the march.

“Students of color like me have been questioning law enforcement’s role in our schools for a long time and bear the burden when schools increase police presence,” said Armani, a youth member of the group who attends high school in the area.

“Fund education, not incarceration,” the teen said, adding that when new waves of school resources officers pack the hallways, it’s mostly “minor offenders” who get swept up and referred to law enforcement.

“The answer to safety is to invest in our communities and in young people, not more policing,” the teen urged.

Other students, such as Krystal, who attends a public school in Elizabeth, gave similar reasons why they’re pushing for less cops in schools – not more.

“Every day, I wake up and get ready for school, go through a metal detector, and then get searched by security,” the high school sophomore said. “We are sent home if we don’t have the complete uniform, which costs more than $100, an amount that many students can’t afford. Instead of receiving an education, I’m being punished.”

Meanwhile, as spending on security increases, no money seems to be available for other crucial needs, the youth pointed out:

“Our bathrooms are also closed. We only have two bathrooms open, one for girls and one for boys, for a school with over 700 students. This leads to long waiting lines to use the bathrooms, which makes us late to class and we get detention. Instead of blaming students, it is time for our schools to take accountability.”

Other testimony from youth advocates included:

Diana, high school senior in Elizabeth – “In our high schools we are stereotyped. In school they believe if you are not in compliance with school uniforms, you will cause problems. And if you show up with non-black sneakers, which is part of the uniform, you will have to sit in the office to wait for someone to bring you one in order to receive an education. We must move past archaic ways and provide modern day solutions to modern day problems. Let’s be the change we want to see and steer away from oppression into progression.”

Jay, high school student and youth leader at Make the Road NJ – “The ratio of law enforcement to counselors in large urban districts like Elizabeth is not normal. Our youth face suppressions based on our skin color and the way we are dressed. Law enforcement’s job is to protect. Do not make us a threat. We are here united calling our administration to hear our call and take action. We call on the administration to listen to student voices when determining school policies, to invest in counselors, restorative justice and after school programming and no more policing in our schools. It’s time for a change. We are the change.”

Dylan, high school junior – “My school had a lockdown six months ago. The security personnel and administration organized us in groups by sex and began searching every single student. I felt I had done something wrong. Afterwards, we got a lecture from the administration about vaping and the consequences of bringing it into the school. When we returned to our lockers, we found our book bags had been opened without our consent and our things out of place. The extreme long lockdown led to a shorter class time and more homework than normal days, which stressed us a lot. School administration should consider the mental state that they put us through when they do this type of security measures without our consent and our parent’s consent.”

Together, the students put forth a list of four demands:

Need more convincing? Here’s some food for thought, according to Make the Road New Jersey:

SCHOOL-TO-PRISON PIPELINE – “Overpolicing in schools results in racially disparate outcomes and creates a school-to-prison pipeline in New Jersey. While the data is incomplete, of the cases New Jersey reported to the federal government last year, the state reported 664 school-related arrests to the Office of Civil Rights. Of these, 31% were of Latinx students (several points above their 27% proportion of overall enrollment), and 29% were of Black students (despite the fact that Black students comprise only 15% of New Jersey’s student body). Black students, and particularly Black boys, were referred to law enforcement at significantly higher rates than white students. Nearly one-third of all reported referrals in New Jersey were of Black youth, who account for only 15% of the student population.”

Co-sponsors of Thursday’s march included the ACLU of New Jersey, NJ21United and March For Our Lives New Jersey.

Pride Gives to the Community!